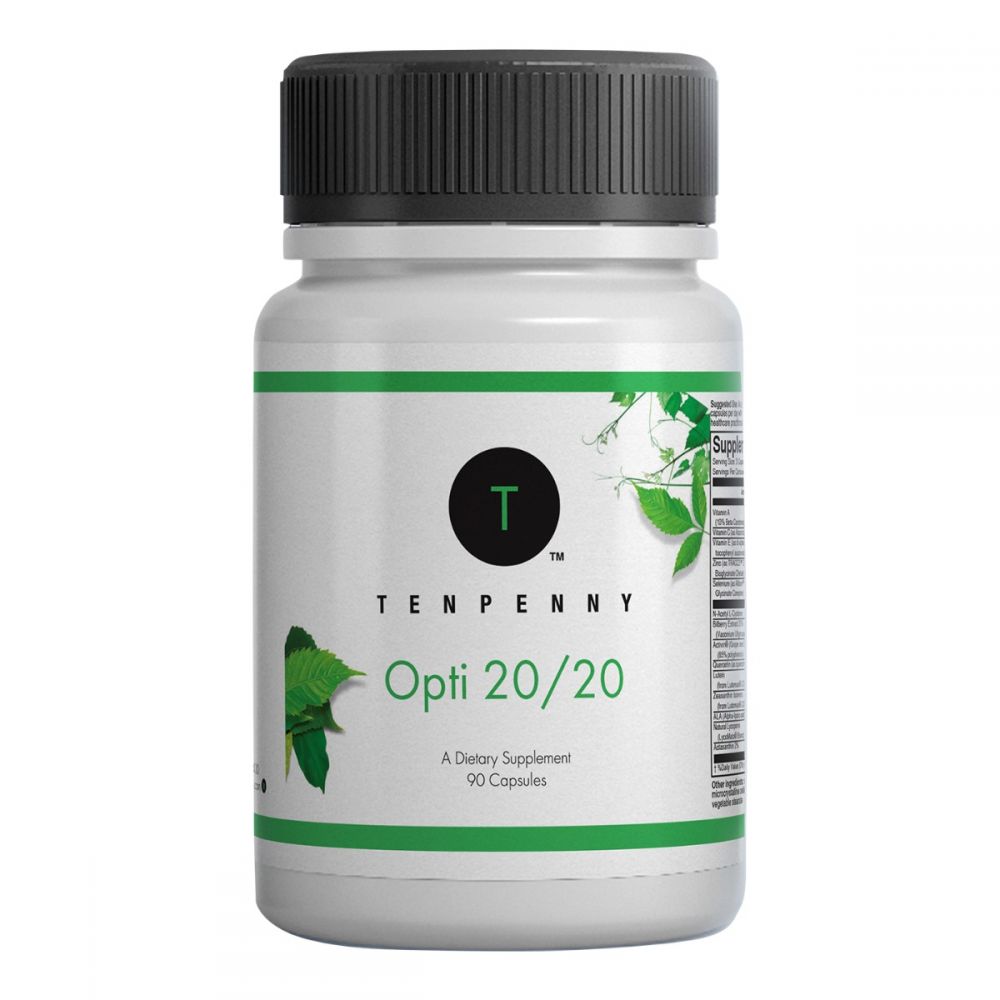 Opti 20/20 contains various nutrients and herbs that have been used to protect the functioning of the eyes.

Vitamin A is a group of antioxidant compounds that play an important role in vision, bone growth, and immune system health. It also helps the surface of the eye, mucous membranes, and skin to be effective barriers from bacteria and viruses, reducing the risk of eye infections, respiratory problems, and other infectious diseases.

Vitamin C- High dietary intake of vitamins C and E are associated with a significantly reduced risk of cataracts or cataract surgery, according to research in Spain.

Vitamin E- Recent research (2015) shows that vitamin E intake either through diet or supplements, as well as high serum tocopherol (vitamin E) levels in the blood, are associated with a reduced risk of age-related cataracts.

The AREDS supplement included 400 International Units (IU) of vitamin E, as well as high levels of vitamin A (as beta-carotene), vitamin C, and zinc.

Zinc (TRAACS™) has been used along with other nutrients and antioxidants to slow the progression of age-related macular degeneration. Selenium (TRAACS™) helps support zinc absorption.

N-acetyl cysteine (NAC) is a precursor to glutathione, a powerful antioxidant. N-acetyl cysteine has many medicinal applications such as in bronchitis and other lung diseases. It also plays a role in reducing oxidative stress in the cornea. NAC helps corneal cell survival and increases antioxidant markers in the eye.

Grape Seed Extract (Activin®) contains a significant amount of proanthocyanidins. In one animal study, grape seed extract combined with zinc (also present in 20/20) prevented the formation and progression of cataracts.

Furthermore, markers of oxidative stress were lower in the treatment group. Another study shows that grape seed extract reduced free radical damage and cell death in cells of the lens.

Quercetin is a member of the flavonoid family and is a prominent dietary antioxidant. Quercetin is used in age-related macular degeneration to improve cell membrane integrity and mitochondrial function, as well as reduce inflammatory mediators.

It has also been studied for its ability to reduce fibrosis of the cornea in diseases like keratoconus. Quercetin plays a role in reducing allergies as well.

Lutein and Zeaxanthin (Lutemax 2020™) are categorized as antioxidants in the carotenoid family and are also macular pigments found within the retina of the eye.

They protect the retina from damage caused by sunlight. Increased levels of macular pigment are correlated with a decreased risk of age-related macular degeneration.

Taking these antioxidant pigments as supplements correlate with increased levels of macular pigment measured in the retina and may also improve visual function.

In a study that spanned five ophthalmology centers in the United States, the subjects eating the most lutein and zeaxanthin had a 57% decreased risk of macular degeneration.

ALA (Alpha-lipoic acid) is a powerful antioxidant. ALA scavenges free radicals and promotes regeneration of vitamin C and glutathione, which can, in turn, recycle vitamin E. ALA’s antioxidant properties are especially suited for preventing the diabetic complications arising from an overproduction of reactive oxygen and nitrogen species, and ALA also promotes the uptake of glucose.

ALA may protect the lens of the eye through antioxidant activity and delay the development and progression of diabetes-related cataracts (rodent study).

As a dietary supplement, take 3 capsules per day with meals, or as directed by your healthcare practitioner.

Warning: If pregnant or nursing, consult your healthcare practitioner before taking this product.